Gwen Stefani served up some amazing looks in season 19 of ‘The Voice’. She saved the best for last in a green crop top and huge green tulle ball gown skirt for her performance with Carter Rubin.

Gwen Stefani It felt like Christmas during the season 19 finale of NBC’s The Voice on December 15th. She wore a costume that literally made her look like a Christmas tree when she went on stage to perform with her 15-year-old finalist Carter Ruby. Her pine green ball gown skirt was covered in layers of tulle that looked like branches as the skirt narrowed from the broad floor to her tiny waist.

Gwen Stefani serves up a super festive green outfit to appear with her candidate Carter Rubin in the finale of ‘The Voice’. Photo credit: NBC.

The skirt was covered with red bows that would be used to decorate a Christmas tree. But Gwen was sex appeal with the rest of her cast. She wore a matching green crop top that was crossed with straps at the neckline. The 51-year-old flaunted her tight bare abs and slim waist. Gwen rounded off the look with a red velvet headband in her blonde hair. Gwen has made it onto The Voice in fabulous outfits all season, and you can see photos of her best looks here. 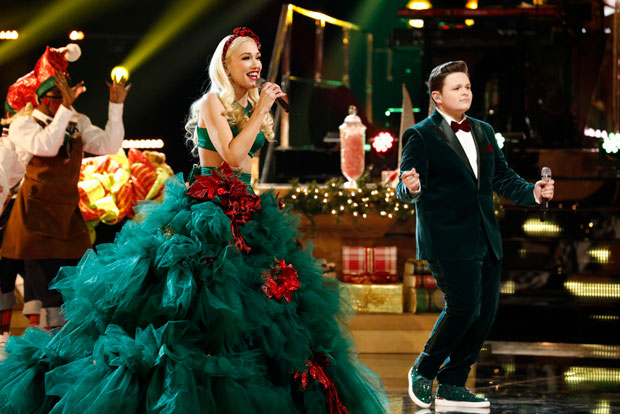 Gwen Stefani and Carter Rubin appear in the season 19 finale of ‘The Voice’. Photo credit: NBC.

Young Carter matched his beloved trainer in a green velvet tuxedo when the two performed their Christmas song “You Make It Feel Like Christmas,” the theme song from their 2017 Christmas album. Carter took on The Voice Coach for Gwen’s fiancé and colleague Blake Shelton, 44, who recorded the original duet with his sweetheart.

SPOILER ALERT: Gwen had a really big night on The Voice when she scored her first coaching victory when Carter was crowned champion. The season 19 winner was also the youngest man in the show’s history to emerge victorious because he is only 15 years old. Just before his name became known, Blake repeated excitedly, “Oh my god. Oh my god “as his finalist J.in the ranger I went for the win against Carter while Gwen got a case of nervous giggles.

When Carter’s name was read, Gwen gave a scream of joy and went on stage to congratulate her first winner. But you could hear her say, “I can’t hug him?” and had to stand six feet from Carter as they parted in the rejoicing while social distancing themselves due to COVID-19 protocols. The singer of “Hollaback Girl” had transformed into an elaborate dress with a rose theme, with a large pink open rosebud as a headgear. This was Gwen’s fifth season as a coach on The Voice, played in previous seasons 7, 9, 12, and 17. Gwen also had the satisfaction of beating her fiancé Blake twice, with Jim finishing in second place, followed by Blake’s other contestant Ian Flanigan in the third.